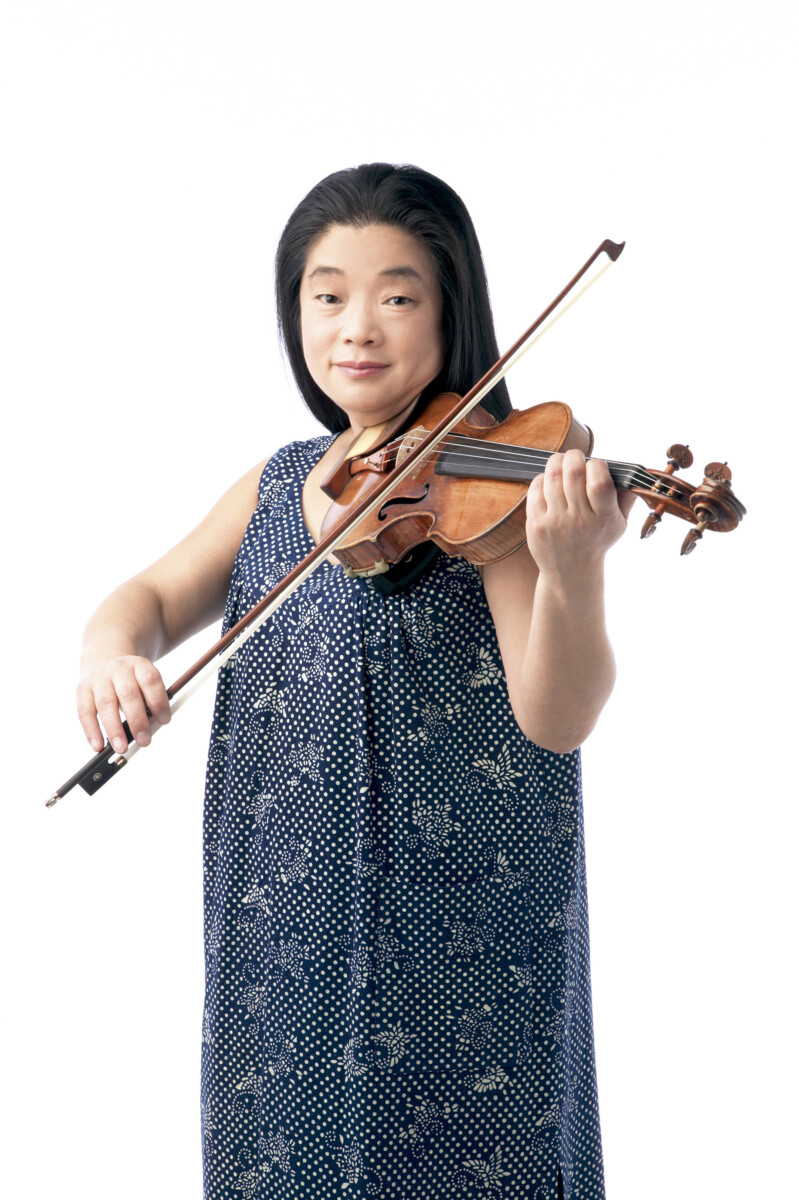 Atsuko Temma, born in Tokyo, started playing the violin at six whom she happened to join an NHK program, “Let’s start playing the violin”. There her endowment was acknowledged by the teacher, Toshiya Etou and it led her to the road of a professional musician. While studying at Tokyo Geijutsu Daigaku (Tokyo National University of Fine Art & Music) and its graduate school, she won various prizes including the first prize at the Music Competition of Japan, a special silver prize at the International Competition of Marguerite Long Jacques Thibaud and others, all of which gave her the worldwide fame as a result. She then kept studying under Unno Yoshio, Keonid Borisovitch Kogan, Herman Krebbers and others.

In 1992, she visited Rumania for the first time as a “Cultural Ambassador” and her performance there received a high appraisal from the cultural minister of Rumania, saying “she was the violinist who has given the greatest ever since David Fiodorovich Oistrakh”. Her performance gained an epoch-making success there. It was in 1993 that she introduced to Japan “Balada” by Porumbescu, an unfortunate genius composer. Since then, this piece has been a huge hit just as if the piece was a pronoun of herself. This phenomenon was indeed an unexceptional case in our classical music industry. The beautiful melodies with some sorrows as well as its episodes in the piece are often talked about.

Atsuko Temma was once modeled as a main passionate female character in a novel, “A Hundred Year Prophecy” written by a literary prize winner, Nobuko Takagi. It was run a serial in the morning edition of Asahi Newspaper throughout the year of 1998. Needless to say, the piece played with a sorrowful melody throughout the novel is “Balada”. “Wagakokoro no Tabi, Hyouhaku no Balada” that has been televised over and over on NHK/BS since 1995 has given deep impressions to its viewers. Her autobiographical essay, “Wagakokoro no Uta, Bokyo no Balada” was published from Bungeishunju publisher in 2000. This essay has been gaining public favor and running into several impressions. Also, the scene of “Balada” performed at Kioi Hall in January, 2005, was used in NHK special documentary drama, “Bokyo” (script & direction by Sakae Okazaki) on HNK which has been televised over and over again since May 2005. Not only the fineness of its piece but also Atsuko Temma’s personal magnetism was again spotlighted.

Many of her albums have been released so far. “Balada” with record-breaking sales was recorded in 1993 and released from Art Union Records. The grand prize for “My favorite Japanese contemporary masterworks for violin” was given by the Agency for Cultural Affairs. Now she has transferred to King Record Co., Ltd.. “Balada” was released in autumn, 2003 and cerebrated the 10th anniversary ever since she met this piece. This album has received high popularity and kept as a long time seller. She was in charge of the performance for the theme that was composed by Asei Kobayashi on “Hidetaka Yoshioka Silk Road Roman”. This program was televised in January, 2004. She has released an album entitled “Silk Road” at the same time. In May, 2004, she also released a DVD entitled “Balada, Temma Atsuko in Hayama, 2004” for the first time in her career. A long-sought J. S. Bach’s “No.3 for violin solo in E major BWV 1006” was finally released in November, the same year. This album attracted a great deal of the musical circles. “Japanesque” was released in April, 2005. Three newly written pieces by Asei Kobayashi who acknowledges himself as a big fan of her are included in this album. In September, 2005, “Prayer” played together with the organist, Hideyuki Kobayashi, was completed. This album had an honor of winning a prize for planning at the 47th Japan Record Award. “Zigeunerweisen” was released in September, 2006. This album was themed for “Longing for travel” and has kept record-breaking sales.

Not only with her flawless performance of music, her way of telling with a strong personality and a very powerful self-charge of herself on the stage are often talked about as her real attraction. Only a very few people, however, know about her hidden efforts spent for score reading and days of constant practice. Despite of her popularity, she tries to visit Amsterdam several times a year and keeps learning under Herman Krebbers to whom she looks up as her lifetime mentor. She is now a professor at Toho College of Music.

The violin she plays with is the masterpiece of the Stradivarius’ later years. The bow she uses is the great bow used by the legendary master, Eugene Ysaye.