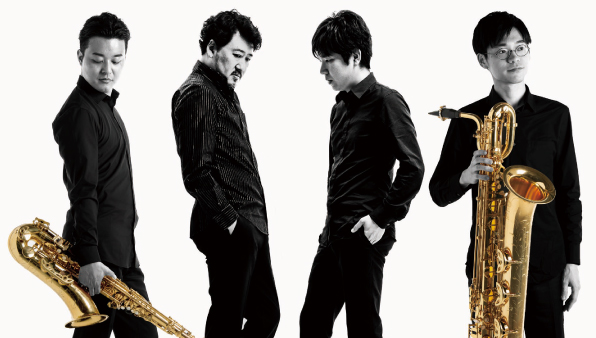 The Blue Aurora Saxophone Quartet is a creation of Masataka Hirano, one of the innovators of the music for saxophone. The name of this quartet was chosen to be a reference to Takemitsu Toru`s work “Blue Aurora for Toshi Ichiyanagi”.
Young Masataka Hirano made his debut soon after graduation from the Conservatoire de Paris. His first release, a mini-album called “Millennium” was released in the year 2000. It is a distinctive work, a fusion of new sounds and improvisation. In the following years, his creativity has kept giving birth to many other releases, all of them acclaimed by the international music community.
It was during his solo career that Masataka Hirano had the chance to encounter other amazing fellow saxophonists. They shared his same musical vision, but each one of them had a distinctive personality and talent. It is together with these three new comrades, Masanori Oshi, Jun Nishimoto and Takuya Tanaka that he formed the Blue Aurora Quartet.
Their debut cd “First Blue” was released in 2011. The tour for the release of this first album was a great success, and until today they have published three CDs.
Since September 2016, Makoto Hondo has joined the formation as baritone saxophone.

The Blue Aurora Saxophone Quartet was formed by the “revolutionary of the saxophone universe”, Masataka Hirano. His co-founders are three great solo saxophonists who share his musical vision: Masanori Oshi, Jun Nishimoto and Takuya Tanaka.
Their debut release as a quartet was published in 2011, and titled “First Blue”.
Since then, The Blue Aurora Quartet has released two other albums. “Blue Bach”, a compilation of Bach`s pieces, was released just one year after their debut in 2012, and their newest work, “Wagaku”, came out in September 2015.
The recipe of their music is classical music seasoned with Jazz sounds and improvisation. Since their formation, their varied selection of pieces has amazed an increasing number of listeners.
In September 2016, Makoto Hondo has joined the formation as baritone.

Masataka Hirano – Soprano Saxophone
From pure classical music, to jazz and improvisation, Masataka Hirano is a gifted saxophonist who can move across genres. After graduation from Tokyo University of the Arts, he studied at the Conservatoire de Paris. He excelled in the J.M. LONDEIX International Saxophone (JMLISC) Competition and was the first Japanese competitor to win the first prize. He works as a lecturer at Tokyo University of the Arts, Elisabeth University of Music, Toho College of Music and Senzoku Gakuen College of Music. He also is a fulltime teacher at the European University of Saxophone and Habanera Saxophone Academy.

Takuya Tanaka – Alto Saxophone
Takuya Tanaka has been playing saxophone since the age of 5. He is the first prize winners of the 25th Japan Wind and Percussion Competition`s Saxophone division, and the recipient of two special awards: The Minister of Education, Culture, Sports, Science and Technology’s Award and Tokyo Governor`s Award. Again, he was awarded with the JASSO Students of the Year Scholarship and the Tokyo University of the Arts Scholarship. Among his mentors were Masataka Hirano for saxophone, Kinichi Nakamura for chamber music, Sachikazu Hayashida and many others. He had been teaching at the Metropolitan Senior High School of Fine Arts, Performing Arts and Classical Music; and Tokyo University of the Arts. Now he is a lecturer at Senzoku Gakuen College of Music.

Jun Nishimoto – Tenor Saxophone
Jun Nishimoto studied at Osaka College of Music`s Instrumental Music Department. After graduation he continued his studies at the same University, in the Wind, String and Percussion Instruments Research Room. He is the recipient of the first prize at the Nonaka Saxophone Concert, classical music section. He also won the 8th edition of the Matsukata Hall competition, and obtained its Special Recognition Award. In 2006 he received the Sakai Tokitada Music Award of the Hyogo Prefecture. Currently, he is concert master of the Japan Wind Ensemble, and a successful professor. He is temporary associate professor at Osaka College of Music and lecturer at Soai University and at Mukogawa Women`s University.

Makoto Hondo– Baritone Saxophone
Makoto Hondo is a former student of Tokyo University of arts and the Conservatoire de Paris. During his master degree at the Conservatoire de Paris, he was admitted to Amsterdam University of the Arts as an exchange student, where he further improved his skills. As a soloist, he ranked first at the International Saxophone Competition in Slovenia, the Adolphe Sax International Competition in France and Andorra International Saxophone Competition. Later, in 2017, he won the 34th Japan Wind and Percussion Competition (Saxophone division), and he received its special awards. You’d better keep an eye on this saxophonist!